In between the large prosperous shops that opened on Great Plain Avenue in the late 1800s, there were the smaller guys, who managed to carve out small but ingenious spaces for their emerging modern trades.

The development of the Great Plain into the new town center in the late 19th century brought the first real influx of store-front retail with it.  Merchants and craftsmen had a centralized place to set up shop.  Large and grand retail blocks created rows of picture windows for displaying neatly-stocked merchandise.  Smaller shops in between displayed neat signs and a fine variety of goods.

The Little Shop of Ernest Robbins

We have all sorts of beautiful pictures of downtown Needham in the late 1800s – carefully-composed images made by one of Needham’s many photographers, now glowing with the tints of gold and sepia. 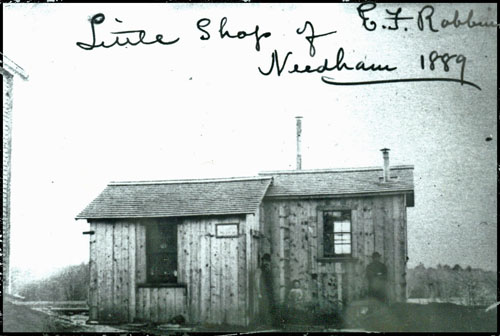 This is not one of those.  This picture is only a few inches across. It is poorly-lit and slightly out of focus.  The only reason we can identify it is that someone scrawled across the top, “Little Shop of E.F. Robbins Needham 1889.”  Which, honestly, was pretty helpful of them.

Robbins shop and home were located, according to the 1888 Needham Directory, as being “off Chestnut.” The 1887 map of Needham shows a similar type of building on a small lane off Chestnut Street, in the approximate location of what is now Briarwood Rehab; a plausible location, but impossible to confirm. This shack appears in the photo to be clad with unfinished pine planks, and warmed by two stoves.  The opening in the front section might have been the business counter, and there is a small sign by the roof line.  It is hard to see, but there are four people in this photo – two men in the angle of the back section, with a small child in a wagon, and a shadowy bearded figure in the darkened window.

Ernest F. Robbins was a machinist and inventor, and however Horrible his little shop looks, it was really a shop of Wonders.  EFR was a man on the cutting edge of 1880s technology. He advertised himself as a Mechanical Expert – “Inventions Perfected and Models Constructed in the Best Manner. Special Attention Given to Automatic Machinery.”  In the 20 February 1890 issue of American Machinist, the Editor notes that, “Our readers will remember that in our issue of June 20, 1889, we illustrated a hollow mill, made for the trade by Ernest F. Robbins of Needham, Mass. Mr. Robbins informs me that he has had an excellent trade in this mill, and that in his other business of light machinery, models, tools, etc., trade is very good indeed, he being badly[?] driven with orders.”  (A hollow mill is a machine part, often used for lathes, which Robbins also made; if you want to know more, you will have to look it up).

Robbins did not stay in Needham for long.  In January 1891, the Needham Chronicle noted that he had left and set up shop in Norwood. A few years later he was living and working in Burrville, CT (near Torrington), running his company Robbins Lathe Tools (“Nurls, Nurl Holders, Screw Chasers, [and yes!] Hollow Mills…”)  His success continued, and by 1910, he may have incorporated as the Robbins Machine Company in Worcester, MA – but now I’m wandering too far from home.

Emery Coulter, Photographer – “Views of All Kinds a Specialty”

This is a much better photo – but then, Emery Coulter was a professional photographer. Coulter mostly operated out of a small kiosk on the corner of Great Plain Avenue and Garden Street, but he also had this mobile wagon for hitting the road.  I don’t if he had them at the same time, or if one replaced the other, or even if they were the same structure with wheels added/removed.  The wagon featured large windows for light, and also good curtains for darkening.  The shuttered window on the side acted as a sales counter, and the racks on the sides showed off his work – mostly formal and group portraits, though he also made images of scenes in Needham.  Signs on the wagon advertised his work – “Views of All Kinds a Specialty.”  There are two people visible in this photo – a woman in the doorway, and a man (Coulter, I assume?) in the window.  The notes for this photo say that it was taken around 1911, when Coulter was taking photos for the Needham bicentennial; however, it may be earlier.  We have about 20 photos identified as taken by Coulter in our collections, mostly from the 1880s and 90s. 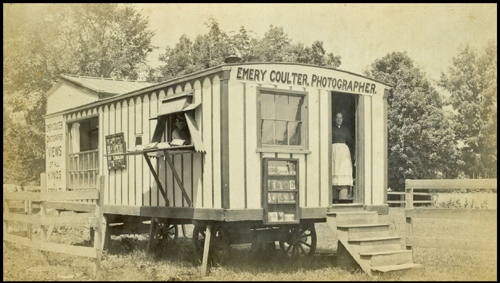 Although Emery Coulter was a photographer, he lists himself as such in only one of the available Needham Directories.  In the 1888 Directory, he is listed as the manager of a “music concert company” and living in his mother’s house on Garden Street.  In the 1892 Directory, he is listed as a photographer, but in 1896 he is a “Humorist and Dramatic Manager” (and still living with his mother).  He does not appear in the later business directories, though the tax rolls list him in 1900 as owning a small house on Marked Tree Road with his wife Emma. By 1910 he is no longer listed as a property owner; however, he presumably stayed in (or near) Needham, because he was buried in the Needham Cemetery in 1937, having lived to be about 72 years old.

Frederick M. de Lesdernier, About Whom I Know Almost Nothing

The sheds are the bicycle repair and equipment shop of Frederick M. de Lesdernier, and the photo dates to the last couple of years of the 1890s. It took me a while to identify the location, until I realized that the tower in the background belonged to the William Moseley Company’s knitting mill on Highland Avenue, between Mellen and Morton Streets. 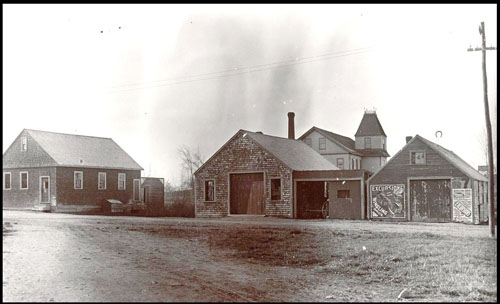 Frederick de Lesdernier shows up in the Needham Directory in 1896, living at the home of his father on Great Plain Avenue near Warren Street.  In the 1901 Directory, he is listed as having a bicycle repair and accessories shop (“sundries” – not the bikes themselves). In the 1900 and 1910 tax lists, he is listed as living in the Oak Street/Linden Street neighborhood and paying the poll tax but not the property tax.  By the 1917 Directory, he is gone from both the residential and business listings.

The picture shows de Lesdernier’s repair shop, on the corner of what is now Mellen Street (dirt road in the foreground), on the site that is now the bank and daycare.  You can’t read it in this photo, but “Bicycles Repaired Here” was written on the large shed doors on the left; the posters on the side of the shed to the right are advertising the Ringling Brothers Circus. Other photos of the shop (there are SIX!) show that the back of the shop was a carriage repair and repainting business, as well as A. McKenzie’s horse-shoeing and jobbing shop. The bike shop shows up on the Sanborn Fire Safety Insurance Company map of 1896. At that time, the street is not named but is known unofficially as “Club,” presumably referring to the building next door to the shop, which is identified as “Club House.”  By 1901, this corner is the site of the new Episcopal Church, which was said to be cobbled together from the structures already on the site (the church moved up the street to its current building and location in 1912). I do not know what happened to the bike repair shop at that point, but presumably the carriage repair shop moved next door to the “club house,’ because later photos show the house with a “Blacksmith” sign on the roof and carriage parts in the yard.